Reduce stress and lower cortisol levels while boosting your immune system—having a chuckle really does help us feel better.

One study found it even improves short-term memory which is great because, well, we forget why, but you get the picture.

Right now, we all could do with more laughter and deeper connections with those in our lives. So try out some of these virtual meeting icebreakers for yourself and enjoy reading the bizarre stories that have come out of Moxie Institute’s own staff below! 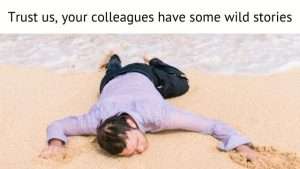 These Virtual Meeting Icebreakers Can Get Real Deep, Dude

Until then, we thought we’d give you a range of icebreakers to choose from depending on how much time you have.

OMG, This One Time…

Life can get weird. And since the world is in lock-down right now so we don’t need to justify that statement. Though we’ve all experienced ups and downs before this so why not share those stories? In this icebreaker, the group leader assigns random numbers to the list of topics below and each person selects a number at random. Whatever they pick is the story they have to tell.And if you haven’t guessed it yet, to help set the tone, every story has to start with “OMG, this one time…”

Topic Suggestions(feel free to add your own):

“OMG, this one time, I was working for a startup and was just grabbing something from a printer, when an FBI SWAT team burst in and started screaming at us! I hadn’t done anything wrong, but I left that job soon after.”

“OMG, this one time, I was on a cruise with my mom and my grandmother and I were given the opportunity to sing in front of most of the ship. I sang one of my favorite songs, Fallin’ by Alicia Keys, and everyone went wild after. It was a fun experience and I felt like a mini-celebrity for a moment!”

“OMG, this one time, I was at Comic-Con and I met a gentleman who was wearing the most intricately embroidered jacket I have ever seen and he looked like Doc from Back To The Future. Turns out he was a magician who sold comics relating to magic. He bought me an ice cream sundae, showed me some of his tricks, but then it took a turn and he started talking about black magic, “real” black magic…so I made an excuse and left!”

Two Truths And A Lie

There’s a lot of benefits from this game. You get to learn facts about your colleagues as well as who is the best at telling liesvirtual communicator. Use this information as you please. Maybe don’t invite HR.

The rules are simple: one person tells two truths and one lie about themself and everyone else has to try to guess the lie.

Stories from Moxie Institute – (Can you guess the lie!?)

“I nearly drowned in a shallow turtle pond. I have never been to Disneyland. My parents speak 5 languages between them but I only speak English.”

“I have been to every continent in the world. I have gone diving with great white sharks in South Africa. And I have driven through the Swiss Alps in France.”

Out of all the virtual meeting icebreakers, this is the most short and quiet.Everyone is tasked with writing out a sentence of 10 words or less that sums up their life story. You might be amazed at how much information can be contained in so few words—unless you work in social media.

This one can be a bit hard for some people to think of so here are some examples:

“Creative woman inspiring others through her journey of finding herself.”

“I fell head over heels in love with life.”

There are few things more enjoyable than watching someone be thrust into a crazy situation and watching them panic.

But these aren’t strangers on reality TV, they’re your colleagues—so it’s even more enjoyable. Out of all the virtual meeting icebreakers this one can get pretty silly.

In this game, you provide a challenging and thought-provoking scenario and the group votes for a “leader”. The leader then has to present their plan of action in an articulate and confident manner.

We’ve provided some prompts to get started but you’re encouraged to think of your own and add in more restrictions and issues as their plan unfolds!

“I actually developed suits that look like 7ft radioactive squirrels. We’re going to study and mimic how the squirrels live and how they act. We’ll then disguise ourselves and sneak through the nest.”

“That’s great! But there’s a nuclear winter coming so we have to move now. Unfortunately, it’s also the squirrel’s mating season, how do we get through this?”

“We’re going to figure out what traits the most unattractive squirrels have so we can imitate them and appear undesirable!”

“I would start with the toothpicks. I’d negotiate with the aliens, (who have traveled through space for them by the way so they must really want them), to trade all of Earth’s toothpicks for their interstellar space travel technology. I would say this would help ensure Earth bows to them. I’ll assume the negotiations go perfectly. But now we have the issue of pride. How do we get people to bow? Well, we can maybe convince the aliens that they misunderstood us during their observations. And that actually our ‘bow’, our sign of respect, is showing the middle finger. Then as a species, we all do it at the same time via an interstellar Zoom call thus satisfying the aliens.”

We genuinely had a ton of fun doing these virtual meeting icebreakers and learned a lot about each other. On your next meeting, set some time aside to play at least one of these and enjoy the laughs!

Do you need slides? When Ro works with you on your presentation, keynote or speech, he’ll challenge you to find the core of your message, the soul of your story and handcraft it until it can stand on its own. Only then will the magic of enhancing your presentation with slide design, presentation skills and creative ways to engage your audience begin. His mantra is “follow the story, not the slides.” Did we mention… Read More

Karen is an EMMY award winning broadcast journalist, corporate communications professional and executive coach working with CEO’s and C-level executives at leading companies around the world. After a distinguished career as co-anchor of The Ten O’clock News in Boston, she transitioned into the corporate world, building dynamic internal, external and executive communications programs. Karen specializes in… Read More

Jeremy is an avid learner. His humble manner coupled with an insatiable hunger to learn from anyone has resulted in a prolific array of experience and expert competencies. At 17 years of age he decided to devote himself to serving the needs of others in a voluntary ministry. In his volunteer and secular work, he has honed his speaking style to not only…Read More

Write With POWER:
Learn Persuasive Writing
That Makes An Impact

Move entire audiences to action with your words!

You can see how this popup was set up in our step-by-step guide: https://wppopupmaker.com/guides/auto-opening-announcement-popups/