You know it when you see it and you sense it when you don’t. It’s spoken of in hushed voices as if it were mystical and unknowable. It’s the diamond people hope to pluck from their executive coaching.

Highly sought after when populating the C-suites and a total game-changer for a speaker that has it. But defining it? That gets tricky. It’s often easier to define executive presence by how it looks than by what it is. We’re going to do a bit of both.

WHAT IS EXECUTIVE PRESENCE?

That is a question you’ll be answering for as long as you keep asking. Which is good. That means that the concept is bottomless—you’ll always be able to distill, employ, and perfect aspects of executive presence that your competition hasn’t. There will be a constant corner of it that you can uniquely call your own.

Executives make decisions. They judge and direct and it’s expected that others will follow. But if you only rely on your authority, you’ll never cultivate loyalty.

So your executive presence comes down to your ability to inspire others and motivate them to take action for themselves. 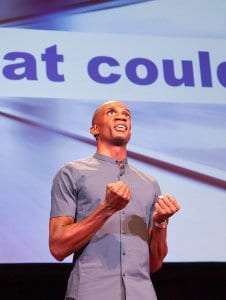 When you inspire, you steer the emotional climate of others around you. You whip up storms of enthusiasm, gales of determination, thunderheads of confidence, and anyone listening to you is swept up and thrilled to follow your lead.

Does this mean that executive presence holds hands with arrogance and belligerence? Far from it.

Past leaders who were masters of executive presence were not overbearing or intolerant of opposing viewpoints. Take figures like Martin Luther King Jr., John F. Kennedy, or Winston Churchill.

Each of them was unflinchingly confident in their ideas, but they never beat anyone over the head with them. None of them shrank from opposition, but neither did any of them go looking for a brawl.

They all represented strength and conviction and even assertion.

They could deliver a message that people might not want to hear and still get listeners.

If you have executive presence, listening to you for just a few seconds is enough to convince anyone that you know what you’re talking about, that you’re someone worth paying attention to, and that you probably have three notebooks full of research on your topic.

Now that sounds like a tall order. You might expect that you would have to have spent time in an executive role if you’re going to wield executive presence.

Executive presence is a skill, not a trait. Nobody is born with it and it’s something you can learn and cultivate and build. This can be done through executive coaching or the sweat of poring over relevant articles and YouTube videos. Take it from one of our TEDx clients Lex Gillette who learned how to bring his incredible story to the stage:

It’s been found that there are many who have executive experience, but they don’t have executive presence. They have the heft but they can’t bring themselves to be compelling. On the other side of the coin, you have those who have never warmed a chair in a C-suite, but they move and talk like they have such a chair waiting for them.

Sure, experience can help. But it’s not a dealbreaker. Now, let’s get down to that signaling!

How do you tap into the emotions of an audience? How do you “make the executive decision” of what they’re going to feel?

Stories are the oldest vehicle for human emotions and if told well, they’re impossible to ignore. They will let you reel your audience in so that you can inspire a full range of emotions, joy, courage, fear, and relief.

What sort of stories can you tell?

Don’t be shy about sharing your own experiences. When related as an experience, dry lists of events become fascinating.

Audiences retain more information when they experience emotion during your talk, and your authentic experience is the surest way to resonate after the presentation ends.

You can also use the experiences of others. Speak to enough people and hit up Google long enough and you’ll have enough anecdotes to sprinkle in your delivery to keep listeners hooked.

You can also humanize yourself a bit by sharing some stories about your mistakes. Portraying yourself as a leader that can acknowledge and learn from past errors will increase your appeal. The conviction that one can do no wrong is reserved for people in history that started world wars.

But be sure to balance out stories of mistakes with stories about your successes, too. And convey the rush of triumph and endorphins in a way that the audience will feel with you.

Is it enough to own the emotions of the people in the room? That would be nice. But you also need to own the space you’re speaking in.

HOW TO WRITE A SPEECH AND WHY IT’S IMPORTANT

Executive presence is how you drive and your speech is the car. If you have the moves of a Formula 1 driver but the rig of Fred Flintstone, the two will cancel each other out. So time to check up on those speech writing skills!

First, a little process of elimination. Think of every bad speech you’ve ever heard. They all sounded like they were being read from a manuscript, didn’t they? It’s funny. How many telemarketers might win us over if it weren’t so blatantly obvious that they were reading their pitch?

There are countless guidelines on how to write speeches, but the number one way to guarantee that you’ll hold attention spans is this:

Write the way you speak.

As long as what’s written sounds like natural speech, your audience will feel like you’re talking to them even if you’re reading. But the more you can separate yourself from a manuscript, the better. This is one of the key reasons some speakers invest in executive coaching, so that they can command an audience without hiding behind papers.

Take the time to read your speech out loud as you write it. This will put it to the proof if it sounds like you’re talking naturally. If you’re tripping over long-winded sentences or you sound like a template, rewriting will be necessary.

It’s a blessing to be alive in our age of technology where you can write the way you speak by speaking. Voice dictation is a standard feature in most smartphones and even computers, so if you’re willing to get past the transition of keyboarding to talking, your first draft will be much closer to the way you talk.

You might find yourself overwhelmed and lost if you’re going to be speaking at length. Perhaps you’re unaccustomed to being in front of an audience for more than just a few minutes and the preparation of your material has you wondering where to start.

Whether you’re writing a speech or an article or anything else, you can save yourself so much trouble if you break the project down into its core components. Don’t look at it like it’s this big long project. Look at it as a quilt: Isolated segments that can be worked on individually and then pulled together into a whole.

Are you giving a 30-minute speech? Don’t obsess over how you’re going to take up 30 minutes of talking. Identify three key points and spend 10 minutes on them each. Or spend five minutes at a time talking about six ideas. Anything other than one massive 30-minute project will be easier. Something that executive coaching and speech writing can help you perfect. Another of our TEDx clients—Janine Driver—found out just how powerful preparation can be:

We’re not talking about redecorating your office. We’re talking about how you handle the stage or the floor you’re standing on while speaking.
If you ever take the time to watch TED Talks and similar events, you’ll notice that the speakers don’t like to stay in one place very long. Their executive coaching has taught them that standing in one place for the entire presentation makes them look paralyzed and small. Those that stay still eventually blend in with the synthetic potted plants, and we know how much audience engagement those have!

Perhaps you’re not inclined to move around much because of the presence of a podium. That’s understandable. But relying too much on a podium can also create the feeling of a barrier between the speaker and the listeners.

Therefore, go for a stroll when you’re speaking. Without doing ballet, strike poses that convey authority and confidence. Signal to your listeners that you’re open and connected to them by opening your chest cavity to them. Don’t fold your arms, for example.

It’s true that some captivating monologues are told with the speaker keeping their head lowered to the floor, as if they’re speaking to themselves. You’re manifesting executive presence, so keep your head held high. You’re a superhero, not a grandparent shuffling through a half-remembered story.

We’ve all seen it before. The speaker that opens their delivery with an apology. Sorry I’m late. Sorry I’m unprepared. Sorry this, sorry that.

They pretty much said sorry for being me.

Listeners are immediately signaled that any money spent on executive coaching was wasted. These are moments to show everyone that you will keep your head on straight and be your best even under less-than-ideal circumstances.

Take care of the way you sound. Muster yourself to convey confidence, enthusiasm, and empathy. These will counteract any defensive vibes someone one naturally put out in a difficult moment. You want to look and sound like someone who’s saying “I’m in control and nothing is going to change that.”

Project authority in your voice to seem like a subject matter expert. Remain calm and composed when the going gets tough, and your gravitas will set you apart in any environment. Brandon Steppe was another person we helped take his TEDx Talk to new heights:

We’ve only scratched the surface of what executive presence involves. What we’ve covered here is enough to get started. One of the better ways to learn executive presence as a speaker is to have someone personally guide you through executive coaching.

And while you may have a public speaking idol to want to emulate, just know that no two people will manifest executive presence in the same way. That might come off as frustrating at first, but it’s an advantage. It means that nobody else can do it like you, including the people that teach you. Once you’ve got it and you flex it, it’s yours.

Moxie knows that everyone prefers to develop new skills in different ways. If you like to learn up close and personal, we have expert coaches for that. If you prefer to hang back and learn from a distance, we offer live online classes and online courses too.

However you take your executive coaching, just know that the goal is to internalize this executive presence and make it a part of who you are. It’s that authenticity and inner confidence that will make you shine!